18 Apr 2022
share
RACINE, Wis., April 19, 2022 – SC Johnson Chairman and CEO Fisk Johnson today welcomed Her Excellency Samia Suluhu Hassan, President of the United Republic of Tanzania, to Racine to discuss their shared commitment to eradicating malaria and to tour the company’s Center for Insect Science and Family Health, one of the world’s largest private, urban entomology research centers. Research from the Center helps SC Johnson in the development of its repellent and insecticide brands such as OFF!® and Raid®, as well as low-cost spatial repellent options for people who lack access to mosquito prevention tools.

“Every minute, a child under five dies from malaria, most of whom are from Africa, and at SC Johnson, we are committed to sharing our expertise in insect science to help eradicate this tragic, yet preventable, disease,” said Fisk Johnson, Chairman and CEO of SC Johnson. “We are honored to welcome President Hassan and are grateful to work alongside the Tanzanian government and the greater East African Community toward our common goal of eliminating malaria.”

Malaria is an illness caused by parasites which are spread to people through the bites of certain mosquitoes. Africa is home to 95% of malaria cases and 96% of deaths. Children under the age of five accounted for approximately 80% of deaths in the region, according to the World Health Organization.

SC Johnson is in the process of developing and testing new, low-cost spatial repellent technologies that can be used by people who lack access to prevention tools in some of the world’s most vulnerable regions. These repellents are easy to use, do not require electricity or flame, and work continuously for up to 10 months. Large-scale clinical trials are underway in Kenya and have been completed in Indonesia and Peru. 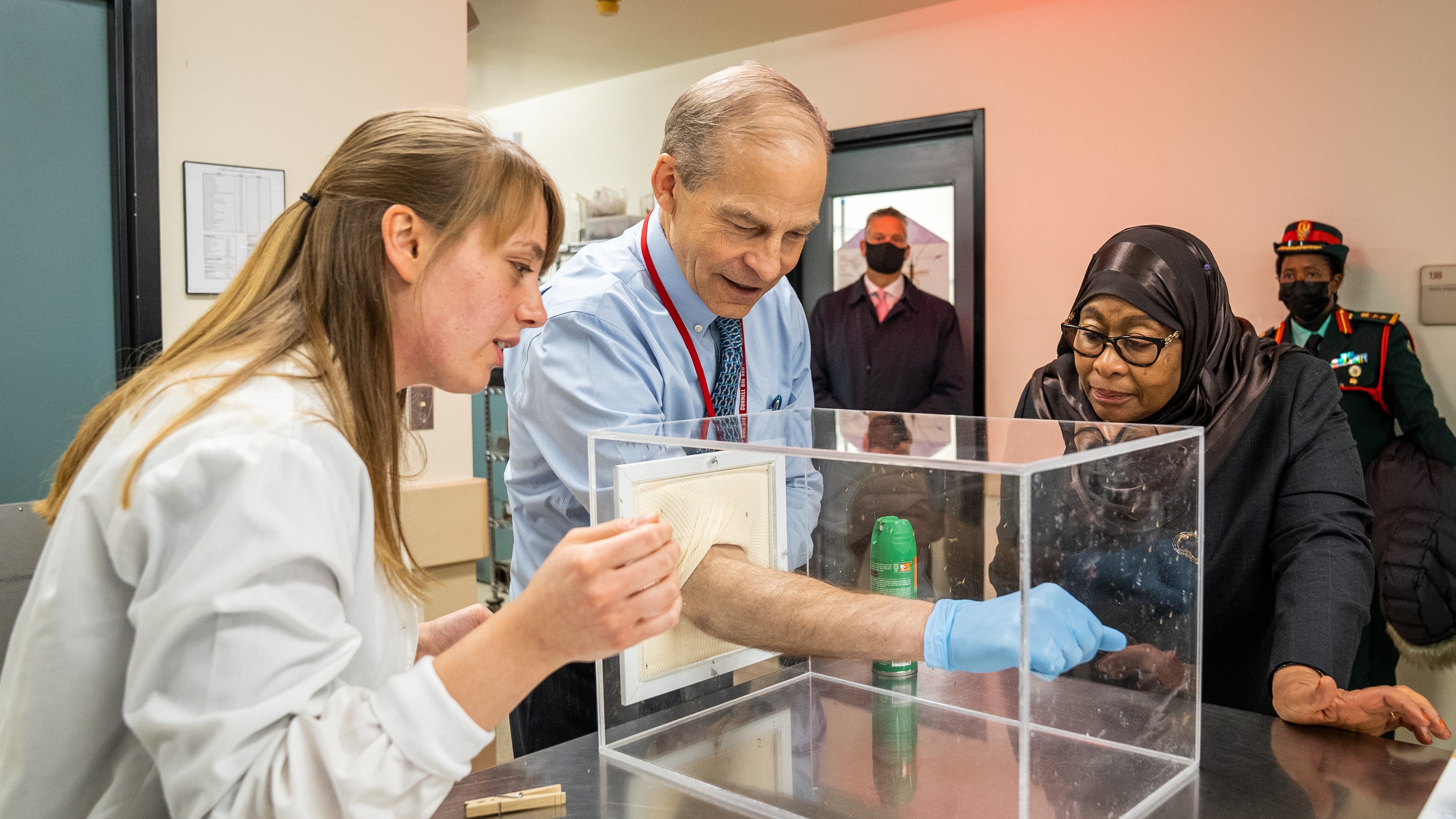 President Hassan of Tanzania observes Fisk Johnson, Chairman and CEO of SC Johnson, testing the efficacy of OFF!® insect repellent at SC Johnson’s Center for Insect Science and Family Health.
About SC Johnson
Founded in 1886 and headquartered in Racine, Wisconsin USA, SC Johnson believes that a more sustainable, healthier and transparent world that inspires people and creates opportunities isn't just possible – it's our responsibility. A heritage of innovation and bold, transparent decisions is why our high-quality products and iconic brands – including OFF!® Raid®, Glade®, Windex®, Scrubbing Bubbles®, Ziploc®, Mrs. Meyer’s Clean Day®, method®, Autan®, Baygon®, Mr Muscle®, Duck®, Lysoform® and more – are in homes, schools and businesses in virtually every country worldwide. Since 1937, SC Johnson has annually given 5% of all pretax profits to charity. Over the last decade, SC Johnson has invested more than $300 million into families, communities, and the planet worldwide. Today, our community efforts focus on building a more sustainable world, a healthier world, and a world with more opportunity.