SC Johnson Brazil has earned the No. 6 spot in the ranking for Best Medium-sized Multinational Workplaces in Brazil.

This is the fourth time SC Johnson Brazil has been recognized on the annual Best Workplace list.

RACINE, Wis., Aug. 16, 2017 – SC Johnson, maker of trusted brands like Glade®, Raid®, OFF! and Mr Musculo®, today announced SC Johnson Brazil has been recognized as a 2017 Best Workplace by the Great Place to Work® Institute. The organization earned the No. 6 spot in the ranking for Best Medium-sized Multinational Workplaces. This is the fourth time the Brazil operation has been recognized on the Institute’s annual Best Workplace list.

Recently, the SC Johnson operation in Rio de Janeiro was also named a 2017 Best Workplace, ranking No. 2 on the list. This is the third year in a row the Rio business has been recognized.

“The Brazil teams continue to build on the good work they have done year after year,” said Fisk Johnson, Chairman and CEO of SC Johnson. “And this award is a fantastic recognition of their effort and dedication to maintaining a great workplace.” 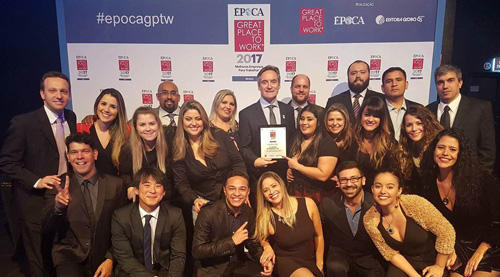 The recognitions for SC Johnson Brazil are two of the latest achievements SC Johnson has received in 2017 from the Great Place to Work® Institute. The Brazil and Rio teams join SC Johnson Venezuela, France, Germany, Poland, Greece, Mexico, Canada, Central America, United Kingdom, Switzerland, Turkey and India on the 2017 list of Best Workplaces. Regional Best Workplace awards for the company’s Europe and Latin America operations have also been announced this year.

The Best Workplaces list is the world’s largest annual study of workplace excellence. The ranking is determined by the results of an employee opinion survey and information provided about company culture, programs and policies.

A Commitment to People and the Community for 80 years

SC Johnson is a 131-year-old family company and 2017 marks the 80th year the Brazil and Rio operations have been an important part of the company’s global success.

In addition to being a Great Place to Work®, SC Johnson is committed to making lives better for families in the communities in which it operates. Recently, SC Johnson announced that it has delivered on a commitment made in 2016 to donate at least $15 million in pest control products and financial support to help at-risk families around the world combat mosquitoes that may carry Zika virus and other mosquito-borne diseases. Much of the donation aided families in Brazil and Latin America.