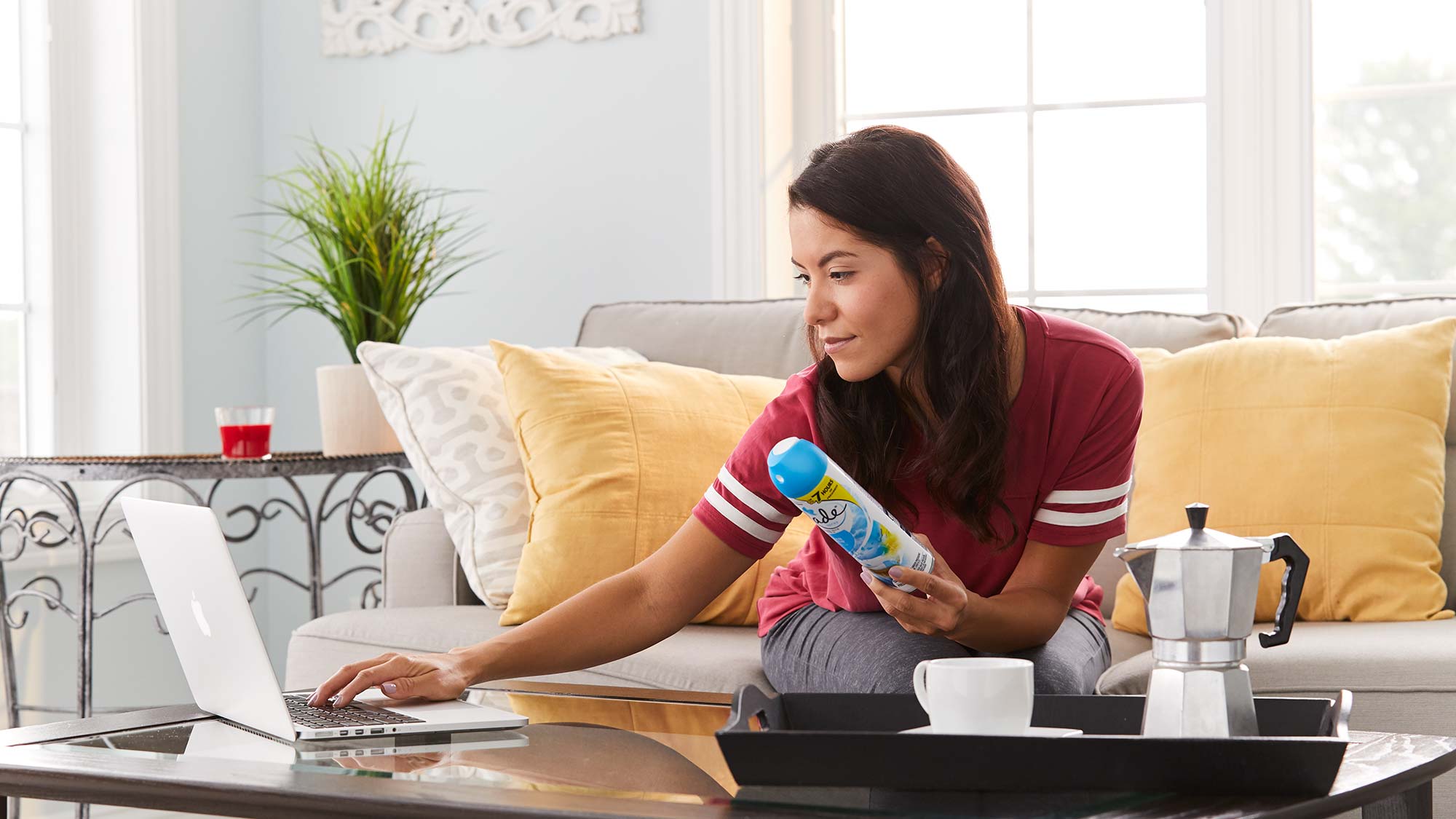 IN THIS ARTICLE
10 years and many firsts later, SC Johnson's product ingredient transparency sets the standard and helps billions of consumers.
SHARE
"For us, transparency is a matter of principle. We're interested in helping people make the best choices for their families." - Fisk Johnson
SHARE

RACINE, Wis., January 8, 2019 – Today, SC Johnson is fulfilling a worldwide commitment made nearly 10 years ago by expanding its industry-leading global ingredient transparency program to Latin America and delivering transparency to consumers everywhere around the world who use its products.
SC Johnson has led the industry toward greater transparency and continues to disclose beyond industry standards. The company has also led the charge with governmental bodies for positive reform of chemical management and disclosure. When the company first announced its ingredient transparency plan, regulations requiring ingredient disclosure did not exist.

“While some companies have been slow to incorporate ingredient transparency with their products, SC Johnson has always led from the front,” said Ken Cook, President of Environmental Working Group. “I applaud Fisk Johnson for his steadfast commitment to consumers as a global leader in ingredient transparency.”

SC Johnson’s leadership in ingredient transparency has paved the way for others in the industry to follow its lead. In 2015, SmartLabel® was unveiled as a digital tool to access a greater range of product ingredients, five years after SC Johnson began disclosing ingredients. SC Johnson has also led the way in advocating for product transparency at the federal and state levels, including strong support for strengthening the U.S. Toxic Substances Control Act and advocating for California’s Cleaning Product Right to Know Act, which was signed into law in 2017 and made California the first state to require ingredient disclosure on product labels and online for cleaning products. SC Johnson has set a bold example in ingredient transparency that has led to meaningful change.

The disclosure of product ingredients is just one of many transparency initiatives SC Johnson has pursued. Over the last decade, the company:

Consumers today expect more from companies, including information about the ingredients in the products they use. According to a recent global public opinion study, 74 percent of consumers worldwide expect companies to provide product transparency on their products and services.

“I’m immensely proud of the dedication and work by the people of SC Johnson to deliver global ingredient transparency,” Johnson said. “Through these efforts, SC Johnson continues to work hard to earn the goodwill of consumers. As a family company, we’re committed to honoring those values and maintaining that trust.”

“Over recent years, we have seen a lot of shifting in the area of ingredient transparency,” said Mary Mazzoni, Senior Editor of 3BL Media and TriplePundit. “For example, consumers now care about the ingredients in the products they buy, how those ingredients will affect their personal human health and, increasingly, the health of the environment.”

SC Johnson’s global ingredient transparency program now provides information for more than 8,700 products used in nearly every country in the world in 35 languages. By meeting this important commitment, SC Johnson is now able to offer unparalleled access to nearly 6 billion consumers, providing a comprehensive list of product ingredients for the company’s many iconic brands.

For anyone wanting to know what’s in an SC Johnson product and why, all the details are available at WhatsInsideSCJohnson.com – written in clear and straightforward terms including the purpose of each ingredient. This simple, easy-to-navigate, mobile-friendly platform enables consumers to pull up a product they are considering, see the ingredients listed in a clear and understandable format, and ultimately make the choice that is right for their families.

SC Johnson in 2018 became the first major CPG company to globally disclose fragrance ingredients down to .01 percent of the product formula across its portfolio of brands. This action continues the company’s decade-long journey to transform industry efforts when it comes to ingredient transparency.

Building upon the company’s transparency commitment to tell the whole story about the ingredients it uses and the rigorous science that informs those choices, SC Johnson in 2017 began sharing publicly the scientific criteria behind the company’s Greenlist™ ingredient selection program. The Greenlist™ program helps the company continually improve its products by choosing ingredients to better protect human health and the environment. People can now see, in detail, the care that goes into choosing each of the ingredients that are used in SC Johnson products.

SC Johnson’s Greenlist™ program has guided the company’s product development for nearly two decades. Every ingredient in every SC Johnson product goes through the rigorous Greenlist™ program, which is centered around a peer-reviewed, four-step evaluation of its potential impact on human health and the environment. The Greenlist™ program looks at both hazard and risk to select the ingredients the company uses, and at what concentration, if at all. It’s grounded in best-in-class data collection and driven by the company’s commitment to continually improve its products.

As part of the Greenlist™ program, SC Johnson maintains a list of ingredients that are not allowed in its products. This list is termed the “Not Allowable” list. It includes over 200 unique raw materials in roughly 90 material categories, and over 2,400 fragrance materials. These materials all meet legal and regulatory requirements — and are often used by other companies in the industry – but simply do not meet SC Johnson standards. You can find more information about SC Johnson’s Greenlist™ program in its 26th annual Sustainability Report, The Science Inside.

Calling for reform of chemical management rules at the federal level, SC Johnson was an early supporter of bipartisan efforts to update and modernize the federal Toxic Substances Control Act (TSCA) to achieve a credible, risk- and science-based federal program for managing chemicals in commerce that inspire confidence in the safety of chemicals used in consumer products. SC Johnson was one of the first CPG companies to publicly testify in support of strengthening the tools available to screen all chemicals in commerce, evaluate the risks of high-priority substances and regulate certain conditions of use where necessary. In 2016, following the signing into law of the Frank R. Lautenberg Chemical Safety for the 21st Century Act, SC Johnson was singled out for leadership in championing this reform by then-U.S. President Barack Obama.

SC Johnson also supported the development and legislative approval of the Cleaning Product Right to Know Act of 2017 by the California Assembly, and partnered with NGOs, industry groups and local legislators to advance the disclosure legislation. This legislation created an industry-wide ingredient communication program for manufacturers of consumer and institutional air care, automotive, general cleaning, polish and floor maintenance products – enhancing ingredient transparency for consumers by requiring full ingredient disclosure on product labels with enhanced disclosure on manufacturer websites.

Also in 2017, SC Johnson added SmartLabel® for many of its popular U.S. brands. The SmartLabel® program offers consumers easy and instantaneous access to detailed information about products — just like on the WhatsInsideSCJohnson.com website — so they can make informed decisions about the products they bring into their homes. By providing consumers with additional places to find information about its products, SC Johnson is continuing to build consumer trust.

With its ingredient disclosure commitment met, SC Johnson is not stopping. Transparency will continue to be a priority as the company continually strives to be the most trusted company in its industry through greater transparency.

“We aren’t done with transparency by a longshot,” Johnson said. “Transparency is ingrained in our values and helps us remain focused on how we operate as a global company to earn the trust of consumers around the world.”