At SC Johnson, we have long been committed to making life better for families around the world. Since 1937, we’ve given 5% of all pre-tax profits to charities. Twenty years ago, we set out to do even more to help some of the world’s most vulnerable populations.

We started looking at how we could help raise standards of living and provide opportunities for a better quality of life for the 4 billion people at the base of the world’s economic pyramid – what’s known as the “base of the pyramid” or “BOP”.

And in recent years, we’ve done even more, focusing specifically on mosquito-borne disease prevention. As our Chairman and CEO Fisk Johnson explains, “Insect-borne diseases are a serious threat to families around the world. We remain dedicated to continuing our leadership in researching insects to help improve family health.”

“
The company is dedicated to improving lives for families around the world in communities of all sizes as well as socio-economic levels. ”
”
Fisk Johnson, Chairman and CEO of SC Johnson

The mission of SC Johnson’s Base of the Pyramid programme is to enable mosquito-borne disease prevention in global communities by delivering affordable offerings that are tailored to the world’s poorest 4 billion people.

Mosquito-borne diseases can have a devastating effect on individuals and communities, and we are committed to helping protect people in vulnerable, difficult to reach communities.

The SC Johnson Base of the Pyramid programme team is working to reduce mosquito populations and encourage education about mosquito-borne diseases like malaria, and create sustainable business solutions to help strengthen communities in developing countries. The BOP programme leverages the best of commercial and philanthropic strategies to maximise social impact and achieve financial viability at scale.

Through the 2017/18 tax year, the BOP programme had reached more than 1.7 million people across seven countries with local programmes designed to teach mosquito bite prevention strategies. Through support of community health posts in Rwanda, access to health services was created for more than 60,000 people – and these posts are expanding with the company’s 2019 commitment to build 40 more health posts.

The team is also working with strategic partners to research, design and test new means of preventing mosquito bites.

Here’s a look at the lives of three people who are among the billions living at the base of the pyramid around the globe.

Sonia is a subsistence farmer who lives in the village of Gatsinsino in Nyanza Province, Rwanda.

Every member of her family has been affected by malaria. Through a local health clinic, Sonia learned how to protect her family from mosquito-borne diseases – sleeping under mosquito nets, clearing brush around the home, discarding stagnant water and mosquito repellents.

But even though she recognises the importance of these activities to protect her family, she must make difficult choices with the fluctuation of her daily wages, which are dependent on her work tending crops. At times, little is left after she buys food and pays for her children's school fees, leaving her family more vulnerable to mosquitoes that may carry disease.

There are malaria interventions available to Sonia, but they can be disruptive and difficult to accommodate between the demands of work and family. For example, when government workers visited her village to spray homes with an indoor residual repellent spray, she declined.

Villagers had been advised to cover large pieces of furniture and empty the home of all portable household items in advance. Sonia refused the spraying because, “I was too busy working to leave time to clear out my whole house”.

Learning: Spending time with people like Sonia and her family reinforces the need to provide solutions that are not only accessible and affordable, but seamlessly fit into her life, align with her priorities and even make her life better.

Actions: To address this challenge, we’re partnering with organisations like Notre Dame and Unitaid to develop and advance mosquito repellent products for inclusion in global public health programmes. 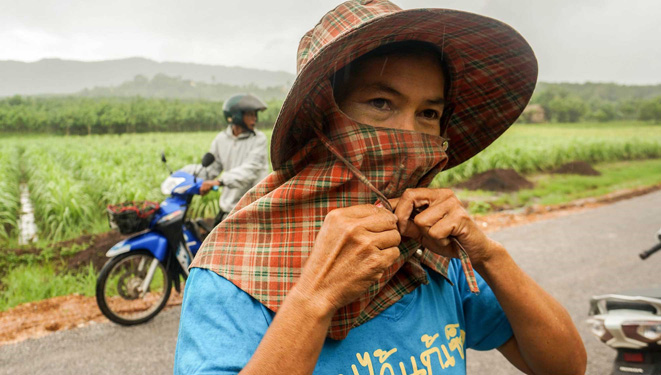 Chit Aung wakes up every day at 1 am to go work at a rubber plantation tapping rubber until 8 am. She lives with her two children in Mawlamyine, Myanmar.

Rubber trees produce more latex at night, so it's important to start work very early in the morning. At 8 am, she cures the rubber, grinding the sap and then rolling it into sheets of rubber to sell at the local market. She can make about three sheets of rubber a day, which earns her 3,000 kyat (about $2 USD) per day.

Chit Aung says there are fewer mosquitoes because deep forested areas have been cut down to create rubber plantations. However, this doesn't keep mosquitoes from being a nuisance while working -- especially during the rainy season. She doesn't bring mosquito repellent with her because she can't afford to use repellent lotions every day.

As a workaround, she does what she believes will help to protect herself from mosquitoes, even if it is less effective than a repellent product. She wears long sleeves and long pants to cover her skin and knee-high boots to protect herself from snakes. At times, she even smokes cigarettes, which she incorrectly believes will repel the pests. She adds, "as long as you keep moving, mosquitoes won’t be able to bite you”.

She knows malaria comes from mosquitoes, but a critical barrier for Chit is that she doesn’t understand that mosquito-borne diseases are spread through mosquito bites. For example, she mistakenly believes that if a mosquito touches a banana or falls into drinking water, then a person is at-risk of contracting malaria. A better understanding of how mosquito-borne diseases are spread through mosquito bites would give Chit greater appreciation for the role of mosquito repellents to protect her family.

Learning: Many of the people we seek to serve live in remote, rural communities that lack access to basic goods and services. We also find that there is typically limited to no awareness of how mosquito-borne disease can be spread and the preventative offerings available. In some cases, people carry misbeliefs about mosquito-borne diseases or prevention that have been passed down from previous generations.

Actions: To address this challenge, we are working with partners in Rwanda to develop national standards to address mosquito-borne diseases, and leverage social behaviour change (SBC) to create awareness of malaria, interventions and behaviours that can prevent the disease. 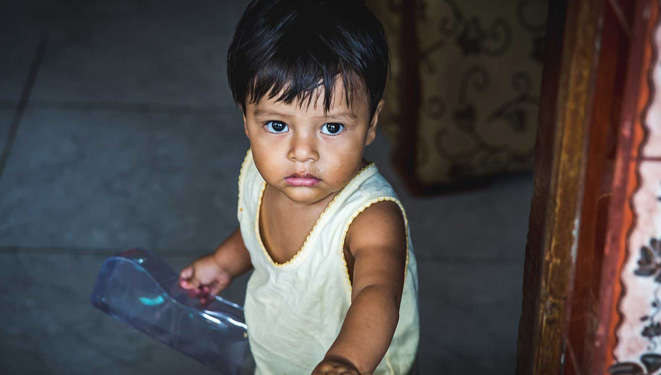 One of Ann's children. Anna is a housewife who lives in Belén, Peru.

This is one of the children of Anna, a housewife who lives in Belén, Peru. Her home is made of corrugated metal and plywood donated by family members and friends.

Many of the family’s possessions are donations, gifts or salvaged materials. Anna's husband, Jacob, works as a labourer, earning a low, inconsistent wage. He earns enough for food, clothing and a few household items but not much else.

Belén sits along the Itaya river. When the water rises, it signals the beginning of mosquito season. Anna struggles to sleep in the evening because of the constant biting and fear that her children might get sick from dengue fever. When her oldest daughter had haemorrhagic dengue fever – nurses at the local health clinic recommended lighting mosquito coils underneath her children’s bed and cleaning the floor with bleach and petrol.

Health workers visit Belén at the beginning of mosquito season to document cases of dengue fever and teach households about mosquito nets. Anna believes that mosquito nets are effective but unbearable to sleep under during the humid rainy season.

“I can't sleep under a net because it's too hot – if I sleep outside the net I will be eaten alive by mosquitoes. Either way I don't sleep", she says.

Learning: Spending time with people like Anna and her family reinforces the need to provide solutions that are not only accessible and affordable, but seamlessly fit into her life, align with her priorities and even make her life better.

Actions: To address this challenge, we take a human-centred approach with organisations like the Bill & Melinda Gates Foundation, and immerse ourselves in our end users’ lives to genuinely understand their priorities, how they live their lives, and what’s truly important to them.

To help families in the base of the pyramid communities – and people everywhere – the SC Johnson BOP programme is focused on malaria as its highest priority. Half of the world’s population is vulnerable to this deadly, but preventable mosquito-borne disease.

Our team has spent time with families in areas where malaria is prevalent, learning about how families live, their aspirations and values. And as part of that, finding ways to overcome the barriers to prevention where they exist, whether it’s access, cost or awareness.

Our work is in service to our mission to enable mosquito-borne disease prevention in global communities by delivering affordable offerings that are tailored to the world’s poorest 4 billion people.

So far, the BOP team has engaged with 1,000+ community members in their villages and homes, and 150+ members of Ministries of Health and non-governmental organisations (NGOs) working on reducing mosquito populations, mosquito bites and mosquito-borne disease prevention methods. The team has also participated in nine co-creation sessions with partners to explore new mosquito control interventions.

It’s not easy. Creating economically sustainable business models that can be scaled throughout BOP communities is difficult. They often involve new distribution channels, new interventions and new behaviour change campaigns. The team continues to try new solutions, and to gain insights from each experience, whether it works or doesn’t. 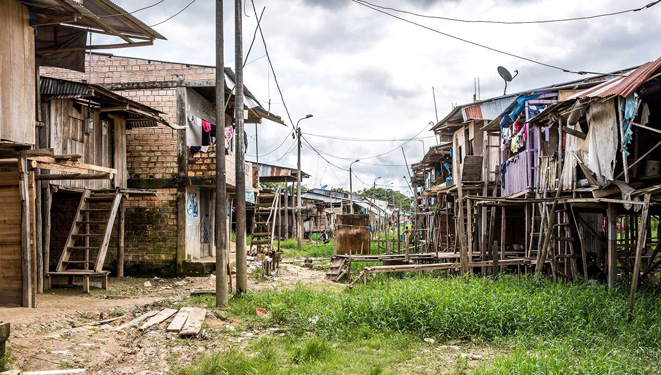 A base of the pyramid village.

Using all that we continue to learn, SC Johnson’s BOP programme aims to drive continual progress against mosquito-borne diseases like malaria through these strategic principles:

Social ResponsibilitySocial Enterprise at the Base of the Pyramid: A Case Study from SC Johnson

HealthThe War Against Mosquito Bites and Other Household Pests: Protection, Prevention and Education