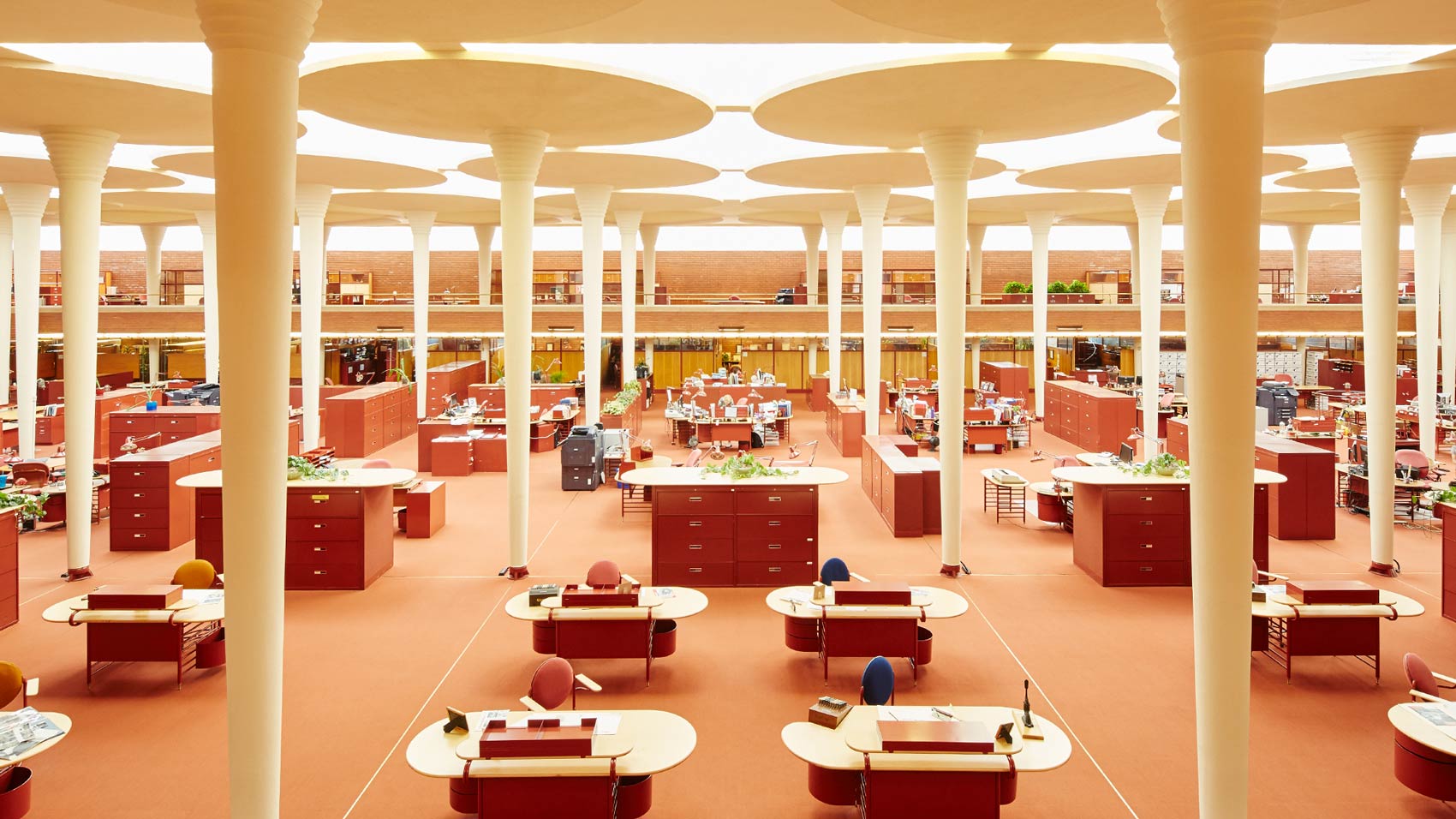 SC Johnson will offer free tours and transportation from the Chicago Architecture Biennial to Racine and back.

SC Johnson’s Administration Building is the only Frank Lloyd Wright–designed office space still in use today.

From September 16, 2017, to January 7, 2018, SC Johnson will offer free tours and motor coach transportation to the public from the Chicago Cultural Center – the hub of the Chicago Architecture Biennial – to the Racine campus and back. Free and open to the public, tours will be offered Thursday through Sunday and reservations are required. All tours include the Frank Lloyd Wright–designed Research Tower and Administration Building; The SC Johnson Gallery: At Home with Frank Lloyd Wright, the award-winning Foster + Partners-designed Fortaleza Hall and time in The Lily Pad gift shop. Weekend trips also include Wingspread. Additionally, SC Johnson will open its campus for “Wright at Night” evening tours with Community Programs at SC Johnson’s Golden Rondelle Theater. Free motor coach transportation to/from Chicago will be available for these events as well.

“SC Johnson is proud to support the Chicago Architecture Biennial, which attracts and inspires millions of people to discover architectural treasures from Chicago to our company’s hometown in Racine, Wisconsin,” said Fisk Johnson, Chairman and CEO of SC Johnson. “Our global headquarters in Racine is home to two great Frank Lloyd Wright structures, and we are pleased to share these remarkable creations with the world and introduce them to a new generation of enthusiasts.”

SC Johnson’s support of the Chicago Architecture Biennial reflects the company’s long-standing commitment to preserving the legacy of Frank Lloyd Wright and creating innovative architectural works in the region. SC Johnson contributed $1 million to the first edition of the Chicago Architecture Biennial in 2015, and is the Presenting Sponsor of the 2017 edition, with a transformative $2.5 million contribution. The company’s campus features two world-renowned, signature Frank Lloyd Wright-designed buildings: the Administration Building, which opened in 1939, and its vertical compliment the Research Tower, which opened in 1950. The company restored the Research Tower and opened it to the public in 2014.

“One of the key missions of the Biennial is to provide a wide range of programs for Chicagoans and visitors to the city. SC Johnson’s fiscal support of the Biennial has made countless programs possible. The tours of the Frank Lloyd Wright-designed buildings on the SC Johnson campus are among the Biennial’s most popular offerings, and we are delighted that they are opening up their corporate home to the public once again,” said Jack Guthman, Chair of the Chicago Architecture Biennial.

“The 2017 Chicago Architecture Biennial is a testament to our city’s reputation as the vanguard of architecture and design on the national and international stage,” said Mayor Emanuel. “SC Johnson is helping to bring awareness to Frank Lloyd Wright’s uniquely American style of architecture, and to the legacy he launched in Chicago at the start of his career.”

To make a reservation for these tours, or for additional information, visit: www.scjohnson.com/wrightnow.

TOUR SC JOHNSON’S HEADQUARTERS AND WINGSPREAD ON THE WEEKEND:

*No tours offered on December 24 nor on December 31, 2017. *Wingspread will not be included in the Sunday, September 17 tour.

SC Johnson’s relationship with architectural icon Frank Lloyd Wright began in 1936, when third-generation SC Johnson leader H.F. Johnson, Jr. sought out the architect. Designs were in development for the company’s new Administration Building, but H.F. wanted a new, more modern approach, even though ground had already been broken and construction was set to start. H.F. later explained, “Anybody can build a typical building. I wanted to build the best office building in the world, and the only way to do that was to get the greatest architect in the world.” Thus, began a relationship between Frank Lloyd Wright and SC Johnson that continues to this day.

Today, two Wright-designed buildings at SC Johnson’s Racine headquarters are on the National Register of Historic Places: the Administration Building and Research Tower. The Administration Building features more than one-half acre of open workspace in the Great Workroom and circular elevators that run from the basement to the Penthouse level, giving a panoramic view of the building. In 1936, H.F. also commissioned Wright to design a home for his family. Completed in 1939, Wingspread sits on 30 acres and was the last and largest of Wright’s Prairie houses.

Designed by Frank Lloyd Wright and opened in 1939, the Administration Building is celebrated as one of the top 25 buildings of the 20th century. From its 43 miles of Pyrex glass tubing to the dendriform columns soaring in the Great Workroom, it is truly a unique work of art that reflects the innovation and adventure that are still part of the spirit of SC Johnson today. The Administration Building is the only Frank Lloyd Wright-designed commercial building still in use today.

Designed by world-renowned architect Norman Foster and his firm, London-based Foster + Partners, Fortaleza Hall is a contemporary partner to the innovative buildings and offerings of Frank Lloyd Wright. Opened in 2010, Fortaleza Hall was named for the city in northeast Brazil that was at the heart of two life-changing expeditions by the Johnson family, and it represents a commitment to the company’s legacy of visionary thinking and inspired architecture. Soaring at the building's heart is the replica twin-engine S-38 amphibian plane that Sam Johnson flew to Fortaleza, Brazil, in 1998.

Beyond the Administration Building that third-generation SC Johnson leader H.F. Johnson Jr. commissioned with Frank Lloyd Wright in 1936, he gave Wright a more personal task, too – to design a new house for his family. Completed in 1939, the home was named Wingspread, reflecting its four wings that spread out from a central core living space. Wright called Wingspread “the last of the Prairie houses,” and its 14,000-square-foot footprint makes it the largest of the Prairie homes as well.

SC Johnson is a family company dedicated to innovative, high-quality products, excellence in the workplace, with a long-term commitment to the environment and the communities in which it operates. Based in the USA, the company is one of the world's leading manufacturers of household cleaning products and products for home storage, air care, pest control and shoe care, as well as professional products. It markets such well-known brands as GLADE®, KIWI®, OFF!®, PLEDGE®, RAID®, SCRUBBING BUBBLES®, SHOUT®, WINDEX® and ZIPLOC® in the U.S. and beyond, with brands marketed outside the U.S. including AUTAN®, TANA®, BAMA®, BAYGON®, BRISE®, KABIKILLER®, KLEAR®, MR MUSCLE® and RIDSECT®. The 131-year-old company, which generates $10 billion in sales, employs approximately 13,000 people globally and sells products in virtually every country around the world. www.scjohnson.com

About the 2017 Chicago Architecture Biennial

The 2017 Chicago Architecture Biennial will be open to the public and on view from September 16, 2017, through January 7, 2018. Press and professional previews will take place September 14 and 15. The hub of the 2017 Biennial will once again be the Chicago Cultural Center, located in downtown Chicago. The opening of the 2017 Biennial will align with the sixth annual EXPO CHICAGO, the International Exposition of Contemporary and Modern Art, which will run September 13–17 at Navy Pier. In addition, EXPO CHICAGO has partnered with the Palais de Tokyo in Paris for its first U.S. satellite exhibition, to kick off EXPO CHICAGO at the Roundhouse at the DuSable Museum of African American History on September 12.

The manifestation of Mayor Rahm Emanuel’s vision for a major international architectural event and an outcome of the comprehensive cultural plan developed by Chicago’s Department of Cultural Affairs and Special Events under the leadership of Michelle T. Boone, the inaugural 2015 Chicago Architecture Biennial was presented through the support of BP, and in partnership with the City of Chicago and the Graham Foundation. Co-Artistic Directors Joseph Grima and Sarah Herda curated the 2015 Biennial, titled The State of the Art of Architecture.

The Chicago Architecture Biennial’s mission is to provide a platform for groundbreaking architectural projects and spatial experiments that demonstrate how creativity and innovation can radically transform our lived experience. Through its constellation of exhibitions, full-scale installations and programming, the Biennial invites the public to engage with and think about architecture in new and unexpected ways, and to take part in a global discussion on the future of the field.

Sponsors and Special Partners of the 2017 Chicago Architecture Biennial

The 2017 Chicago Architecture Biennial is presented in partnership with the City of Chicago’s Department of Cultural Affairs and Special Events and funded through private donations, with lead support from SC Johnson, Presenting Sponsor; BP, Founding Sponsor; Marriott, Hotel Sponsor; and philanthropic support from the Richard H. Driehaus Foundation, Chicago Community Trust, National Endowment for the Arts, and the Robert R. McCormick Foundation.